You may have heard of a “title plant,” or maybe you call it an abstract plant. If you perform title searches on a regular basis, you probably have an idea what it is. But since they are full of legal documents, there can be an air of mystery every time you look. There are terms to learn that may tip you off to a cloud on a title or other issues to straighten out before buying land or leasing a drillsite.

What Is a Title Plant?

Briefly, a title plant (abstract plant) is a service that gathers title documents under one roof for the purpose of delivering title insurance. Each document in a title plant is related to a title for land and impacts real estate agreements far and wide.

Some of those documents and sections are plainly named like property and owner information, legal description, and tax information. Others aren’t so transparent but can be the source of a lot of problems if they are not dealt with.

Specifically, here are three terms landmen and others with an interest in real estate, particularly mineral rights, must understand: Lis Pendens, Chattel Mortgages, and Pooling Agreements.

As with so many legal documents, lis pendens (lees pen-dense)  is a Latin term meaning “a suit pending.” It is a written notice that a lawsuit has been filed with the courts concerning the title or some interest in real property.

A lis pendens is placed on a property for various reasons including divorce proceedings, inheritance problems in an estate, pending foreclosure proceedings, back taxes, and criminal fines.

The document lists the individuals involved in the suit, the specifics of the property, and what relief is being sought by the courts.

The lis pendens is filed with the clerk of the court, who certifies it has been filed. Then it is recorded by the County Recorder. The document tells the owner of the real property that there is a claim against it and  It also tells the public about the claim. Anyone interested in buying, leasing, or otherwise dealing with the property is put on notice.

A lis pendens contains the real property legal description and is only used if a lawsuit involves property. If one is falsely filed, the filer who recorded it must pay attorney fees and a penalty for wasting the court’s and defendant’s time.

Why is finding a lis pendens in a title search such a big deal?

A lis pendens is a big, red flag and most lenders won’t provide financing until the case is settled. Even if you obtain a loan, you won’t be able to get title insurance. A lis pendens can cause problems with mineral leases as well and for the same reasons.

The word chattel may put you in mind of ownership of a human being or something of that nature. For example, slaves were chattel and, for a long time, so were wives and daughters. Thankfully, those days are over, but the term is still used for a loan arrangement where an item of movable property acts as security for the loan.

The key word here is “movable.” Items used for chattel mortgages include automobiles and other vehicles, boats, airplanes, manufactured homes, and farm equipment. Like lis pendens, chattel mortgages are required to be filed publicly so anyone interested in the property on which the mortgage exists is aware of it.

Chattel mortgages tend to carry higher interest rates and shorter terms than traditional mortgages, and differ from them in other ways as well.

Lenders are interested in whether a chattel mortgage has been filed or not by a previous lender. If lenders are not diligent about filing chattel mortgages, it becomes possible for multiple lenders to try to take ownership or sell the chattel if the borrower has not repaid the loan or, more importantly, filed for bankruptcy.

To protect against such a circumstance, lenders can obtain non-filing insurance. You will find chattel mortgage records held in a title plant, but they have little to do with real estate or titles on permanent houses or pieces of land.

At its heart, a pooling agreement is a contractual agreement between shareholders that their shares will be voted as a unit. In real estate the pooling takes place when similar mortgage loans are bundled together and sold as a package called mortgage-backed securities.

In the oil and gas industry, a pooling agreement is a method of sharing production among interest owners in a combined area. Each tract owner may not have enough acreage to receive a drilling permit. If the tracts are pooled, the acreage adds up to the point where permitting is allowed, and smaller mineral interests can band together to develop an area of minerals where each alone would be unable to do so.

Production companies are better served if there is a pooling agreement in the lease. Pooling agreements also protect some interests of the landowner. If the pool clause is not understood by the primaries in a deal, it could result in compulsory pooling of leased land under state law.

Landowners should take particular care to read and understand any lease agreement with a pooling clause attached. Pooling agreements are found as part of the title stored in a title plant and can impact landowners, those with mineral interests and lease agreements, and production companies.

If landowners aren’t careful to specify the acreage included in a pooling agreement, they could find that they have granted pooling rights to more acreage than they intended, impacting their lease and royalty income as well as their ability to sell or lease their land to someone else.

Title plants are fonts of information about real property, with almost any document you could wish for filed in it. However, anyone who performs a title search, grants title insurance, or works with mineral leases should understand all of the terms and documents that may be found in a title plant. 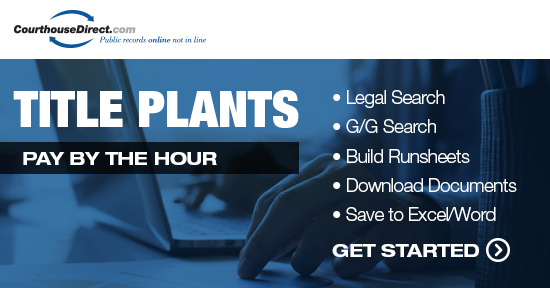